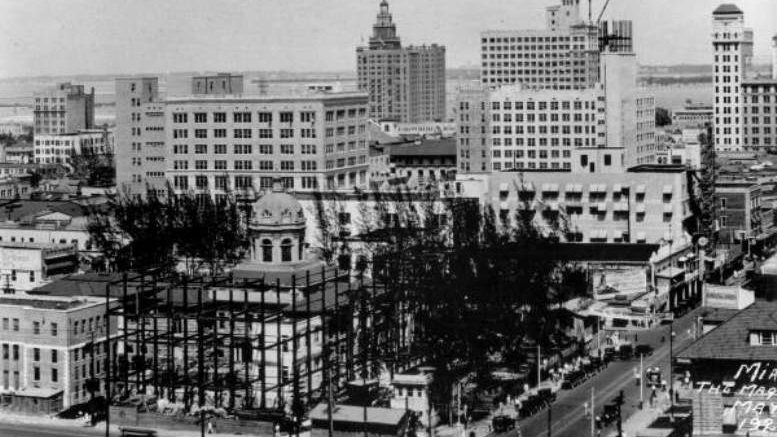 Dade County Courthouse under construction in 1926

The area that became the City of Miami was host to the county courthouse on several occasions before it became the permanent county seat in 1899. Around the time Florida achieved statehood in 1845, the area along the Miami River claimed as its courthouse the home of Dr. Robert Fletcher, a physician who held the office of Clerk of the Court and operated a store and trading post on the south bank of the Miami River. Following the Civil War and during the Era of Reconstruction (1865-1877), William H. Gleason, a Carpetbagger and the political boss of Dade County, moved the dormant courthouse across the Miami River to the north bank near the mouth of the river into a long stone building built in the 1840s. This building served as a slave plantation house when it was built and later as an Army fort. In the 1920s, this building was moved to Lummus Park in downtown Miami and still stands today.

By 1877, Miami remained the county seat of vast, sprawling Dade County. In the meantime, the county courthouse returned to the south bank of the Miami River on property owned by the Brickell family, a large, land-rich family who had moved to Miami from Ohio at the outset of the 1870s.  The county rented the “Brickell Cottage” at the mouth of the Miami River for one dollar per day for each day the cottage was in use.

In 1879, following a tantrum thrown by crusty William Brickell, the family patriarch, the county moved the courthouse back to the old slave quarters, renting it for one dollar per week.  That historic building was the venue for official county records, county commission meetings and as a room where a riding circuit judge could hold court. It was in the old slave quarters that in May 1886 that Circuit Judge Eleazor K. Foster of the Seventh Judicial Circuit heard just one case, a lawsuit brought by William and Mary Brickell against Etta A. Gilbert, in which he dismissed it by transferring it to Orange County. One hundred-thirty years later, 11th Circuit Judge and court historian Scott Silverman, with a nod to the past, heard one case in the same building then reposing in historic Lummus Park near the Miami River.

From 1889 till 1899, the county seat resided in Juno, a small farming settlement one-half mile north of Lake Worth in today’s Palm Beach County. Finally, in 1899 the county seat returned to Miami as the result of another election to determine where it should repose.  The Biscayne Bay area had changed radically by that time following the entry of Henry M. Flagler’s Florida East Coast Railway to Miami in 1896.  Four months after the rail’s entry, Miami, until then a small village standing astride the Miami River, incorporated as a city.  By 1900, Miami claimed 1,681 residents and had become Dade County’s most important city.  The election for a county seat in the previous year was a resounding affirmation of this new order. The county seat moved formally to Miami in 1900.  Workers removed the cells from the Juno jail and placed them, along with one prisoner, and the county records, on a barge for transport to the Miami River, ninety miles away.  Soon the human cargo and freight were delivered to a two-story, wood frame building near the river’s edge on the north bank, on property owned by Julia Tuttle.  The new courthouse building, which stood just east of today’s South Miami Avenue, consisted of county offices on the first floor, courtroom and jury rooms on the top floor, and a jail located at the back of the structure.  The unimposing building was characterized in one account as “dingy” and “cramped.”

Almost from the beginning, the earlier river-based courthouse was insufficient for the growing business of the court. By 1901, there was a clamor for a new courthouse for the rapidly growing city and county, which prompted the county commission to begin the process of building a new facility on twelve lots donated for that purpose by Henry Flagler who had almost instantly transformed Miami from a barren wilderness to an incorporated city. The new courthouse would arise on the site of the present facility at 73 West Flagler Street in downtown Miami. Work began on the future courthouse, a two-story building, in 1902 and was completed two years later at a cost of $49,000. The building was clad in a white limestone facade made from “Miami Stone.”  While the first floor housed the county commission, the second floor contained a courtroom that could accommodate 500 people.  Additionally, the new, red domed building contained two jury rooms, a grand jury quarter, the circuit judges’ chambers, and a witness room.

Upon its completion in 1904, the circuit court and the Dade County Commission moved into the new facility.  The previous courthouse then became the home of the Miami Fish Company until the county razed that structure in 1912.  Thereafter, a warehouse arose on that site and it was said that the odor of the earlier fish house continued to pervade the surrounding area!

When the new courthouse opened, it was expected to serve the needs of the county for fifty years, but no one saw the explosive growth of Dade County in succeeding times.  Accordingly, the county constructed several additions to the extant courthouse, but the growing lack of space in the busy courthouse only worsened.  Many county employees worked from desks in the crowded hallways and by the mid-1920s, two circuit judges found it necessary to schedule their cases so that there would be no congestion in their cramped quarters. But by the 1920s, the sentiment grew louder for a new, larger structure on the same site as the extant courthouse. In June 1925, near the peak of the great Florida real estate boom, the county commission announced plans for a new $4.2 million, twenty-five story courthouse.  Designed by nationally renowned architect Anthony Ten Eyck Brown, and assisted by local architect Walter DeGarmo, the plan called for a neo-classical style building featuring a tower rising from a broad which was crowned with a ziggurat-stepped roof.

During the building’s early planning stages, the county and the City of Miami agreed to share the space inside, with the latter leasing its quarters from the former. Under the agreement, the city of Miami would occupy one-quarter of the building’s floor space under a ten-year lease with the opportunity to extend the lease. The City of Miami remained in the county courthouse, which served as the city hall, until it moved the city commission and other related offices and officials to the former Pan American seaplane terminal at Dinner Key in 1954.

The new county courthouse began rising around the old structure in 1925.  As part of the construction, the courts moved to other, nearby downtown buildings. In 1926, the old courthouse was vacated and soon after demolished. Many of the employees and offices were moved into the recently finished Unit A of the new courthouse, which was two years from being completed.  By May 1927, sixteen floors of the new building were done, and additional pilings were added to compensate for settling of the building after it reached ten floors. The new courthouse was completed in 1928.  At 335-feet above street level, it was believed to be the tallest public building in the United States and the tallest building south of Cincinnati.  All city and county offices, except for the Miami Police Department, filled the new building. The 11th Circuit court occupied portions of the first six floors, while the city and county jails filled the sixteenth thru the twenty-fifth floors.  As stated by famed journalist Damon Runyon, the new courthouse “stands out over the South Florida landscape like a tombstone over a wheat field.”

While it was eclipsed in 1963 as the tallest building in South Florida and has been dwarfed by the addition of high-rise towers in the recent building booms, it has served the needs of the courts and public for more than ninety years. Recent times have hobbled the old, storied courthouse with issues ranging from plumbing to spatial problems and has led to the call for its replacement. There are plans for a sleek glass successor to be built west of its location, which will eventually replace it as a courthouse. Even with the controversy surrounding its shortcomings, the Dade County Courthouse remains one of this expansive area’s most iconic buildings, and easily it most important in point of service.