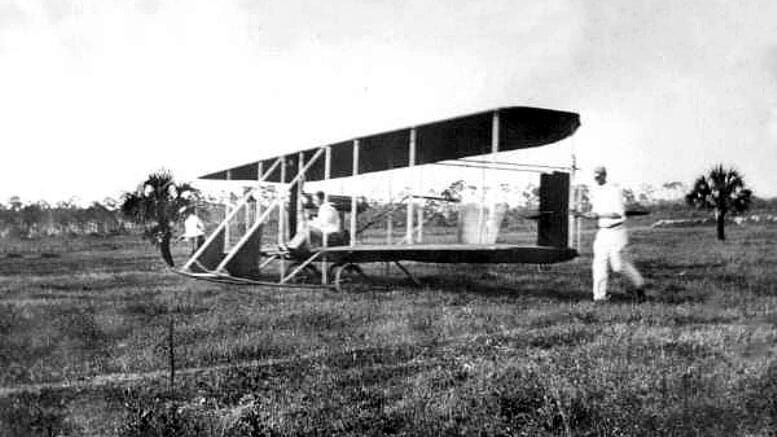 At the onset of 1911, the residents of Miami were preparing for a milestone celebration. While this year only marked the fifteenth anniversary of the city’s incorporation, there was a notable sense of excitement and accomplishment among the pioneers of the soon to be fifteen-year-old municipality.

According to the 1910 census, there were fewer than 5,500 inhabitants living in the Magic City. It was likely that every resident was aware and enthusiastic for the events that would mark the city’s celebration in July of 1911. If they were not aware, it was the decoration committee, responsible for preparing the city for the three-day celebration, who informed them of what to expect and prepare for this important commemoration. 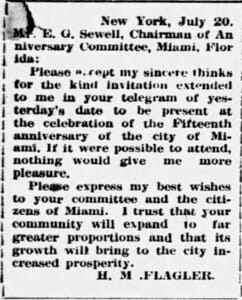 The committee of decorations included some of the most notable pioneer women in the young City of Miami: Adele Sewell, wife of Everest G. Sewell, a three-time mayor of Miami and one of Miami’s most notable promoters. Letah Tatum, wife of B.B. Tatum, along with his brothers, was an early and important real estate developer in South Florida. Marie Romfh, wife of Edward C. Romfh, who was a founder and president of First National Bank. Lastly, Marie Riley, wife of John B. Riley, who was the first mayor of Miami. Marie was also the daughter of Joseph A. McDonald, Flagler’s lieutenant who orchestrated the founding and construction of many of Miami’s first institutions.

Despite not having a voice at the ballot box during this time, these women were the driving force behind the city’s commemoration of its fifteenth birthday. They went door to door in the commercial district to instruct business owners how they need to decorate their buildings for the festivities. They organized a parade, baseball games, speeches and the first flight in South Florida, all as part of the three-day celebration.

The multi-day commemoration took place from Thursday, July 20th through Saturday, July 22nd. The schedule of events by day were as follows:

Music throughout the day by the Second Regiment, Miami and the Key West Light Guard bands.

In addition, the committee commissioned a Welcome Arch which was constructed on the north side of the Twelfth Street and Avenue B intersection. This is today’s Flagler Street and NE Second Avenue. Click on the link associated with ‘Welcome Arch’ to read more about it.

The committee raised money through donations from local businesses. In total, the expenditures for the celebration would amount to $4,755.25, where $2,000 of that total cost was for the transport and rental of the Wright Brothers’ plane for two days of flight exhibitions at the Royal Palm golf course. The latter fee also included compensation for the pilot for his performance. 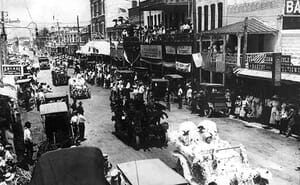 The foundational event of the three-day celebration was the car parade down Twelfth street (today’s Flagler street), to Royal Palm Park. The parade featured a procession of cars, decorated as floats, to provide, as the Miami Metropolis described in its review of the parade, “a beautiful spectacle” of automobiles aligned along the city’s central business thoroughfare.

The celebration committee made sure that every business along the route participated in decorating their business from the Dade County Courthouse to Royal Palm Park. In a schedule of events published in the Metropolis on Thursday, July 20th, the parade route was listed as “the parade will traverse all the principal streets and will be on Twelfth street first and last, and will then surround the Royal Palm Park.”

The parade featured a contest for the best float, and the first prize winner was John Burdine for his store’s submission of a float which was illustrated by the Metropolis as follows:

“One of the most beautiful floats of all was that of Burdine & Quarterman. This car had been fitted up to represent a graceful gondola and was perfect in outline. The boat was pure white, lined throughout with soft mull, and was artistically trimmed with yellow asters. Mrs. John Burdine drove the car while Miss Bettie Nettles Quarterman, Miss Katherine Quarterman and Miss Almira McDonald reclined on the seats. The ladies were all dressed in white Greek costumes tied with yellow cord to match the trimming of the car and looked very charming and attractive as they smilingly greeted their friends in the passing throng.”

There were many other notable placements in the contest including second prize going to B.B. Tatum, third prize to F.C. Brossier & Son, fourth prize to J.H. Tatum, fifth prize to Mrs. P.T. Skaggs, and sixth prize to Mrs. Josiah Chaille. As the parade concluded in Royal Palm Park, it was deemed a great showcase for the Magic City. There were guests from every corner of the state of Florida in attendance to witness the festivities.

Once the parade was complete, the mayor of Miami, Frank Wharton, read a telegram from Henry Flagler expressing his regrets for not being there in person to celebrate the milestone event. At the close of the his address, the lectern was handed over to officials from Tallahassee, which included a speech given by the governor of Florida, Albert W. Gilchrist.

Following the speeches, the crowd gathered in the stands to watch the baseball game. Thursday’s game was won by Fort Pierce and ended just in time for the crowd to begin a procession toward the golf course for the greatly anticipated first flight exhibition in Miami. 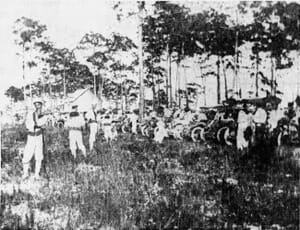 Every available automobile was used to move the crowd from Royal Palm Park to the golf course in order to watch a first of its kind. Howard Gill, a stunt aviator flying a Wright Brothers’ biplane, was scheduled to make three flights on the first day of the aerial exhibition portion of the celebration.

The anticipation of the first flight was palpable. The Metropolis, Miami’s first newspaper, described the atmosphere as follows:

“Long before time for the first ascension, the crowds in the grandstand and in the reserved places at the golf grounds numbered thousands; the band was playing, the breezes blowing, the colors flying and all the rest of it that has made gala week so beautiful.”

A little after four o’clock, the biplane was rolled down the fairway of the links to a location near the golf course clubhouse. Howard Gill climbed into the pilot’s seat and revved up the thirty-five horse-power engine for takeoff. The propellers whirled into motion and emanated a loud buzzing sound. When the plane began to move, it accelerated quickly and glided across the green for about one hundred yards until it began to rise into the air. At that very moment, the first flight in South Florida had commenced. 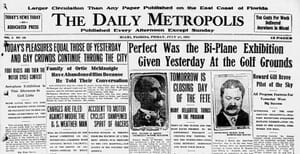 It traveled three times around the golf course, at times coming close to brushing the top of the pine trees in proximity to Allapattah road, or just clearing the top of the high point of the clubhouse rooftop. At the conclusion of his last lap around the golf course, Gill was able to demonstrate his mastery of the Curtis biplane when, under full control, made a flawless landing back onto the fairway.

The second flight featured several stunts, including a dip and glide along the length of the field. As soon as it appeared that the plane would touch down, it would regain altitude at an angle of sixty degrees where Gill would, once again, demonstrate his mastery of the plane. The third flight took place at dusk and rounded out a full schedule of exhibition flights, thrilling the crowd with the novelty of air travel.

The series of flights would be repeated on Friday, July 21st, on the same field with the same pilot. However, the weather provided a different perspective for the attendees of the second day’s exhibition. There was thick cloud cover on Friday allowing the spectators to watch Gill’s biplane reach a higher altitude without being blinded by the afternoon sun, until it was “nearly a dark spot in the clouds”, as described by the Metropolis reviewing the final day of exhibition flights.

Howard Gill’s show provided fond memories for the Miami residents of 1911. It was the first time most of the attendees had ever seen an airplane in flight. Gill became a local legend following his two days of exhibitions. The local newspapers continued to follow the career and write stories about Howard Gill after his show in Miami in July of 1911. He was treated like a hometown hero from that point forward. 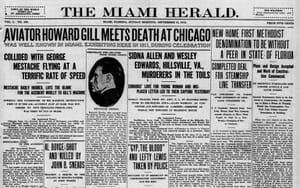 There was risk and reward when it came to the profession of exhibition pilot in the early years of aviation. The renowned pilots like Howard Gill were well compensated to perform at events around the country to showcase the wonder of flight. Nearly half the cost for Miami’s Fifteenth birthday celebration in 1911 was attributed to the flying exhibition performed by Gill.

After his work in Miami was complete, Gill moved onto events in other locales. On October 19, 1911, he broke the American endurance record in St. Louis by remaining in the air for four hours, sixteen minutes and thirty-five seconds. The Miami Herald featured this story on the front page of its October 20th issue. This was one of his signature accomplishments as an aviator.

With great reward, also came great risks. On September 14, 1912, Howard Gill was involved in a fatal accident in Chicago while performing maneuvers in his biplane in conjunction with another aviator flying in a monoplane. The two flyers were crossing paths at dusk when Gill’s plane brushed the other plane leading to the fatal crash.

The passing of Howard Gill was front page news in the Miami Herald the following day. The article stated that Gill was reputed to be wealthy and that he took up aviation in 1909. The last statement in the article read: “Howard Gill was well known in Miami, exhibiting at the golf grounds last year during Miami’s birthday celebration, being the first birdman to fly in Miami.” Although Gill hailed from Baltimore, Maryland, the somber tone of the Herald’s article was as if the city of Miami lost a hometown hero.

While Miami continues to recognize its birthday every July 28th, there has not been a major birthday celebration since its centennial in 1996. While a city’s fifteenth birthday is not quite the same milestone as a centennial, its pioneer residents overcame adversity and difficulties to reach fifteen years of existence and took time to celebrate the accomplishment in 1911. Miami certainly had its share of problems during this era, but everyone came together to make the three-day commemoration memorable.

On July 28, 2021, Miami will recognize its 125th year since incorporation. This mark is a year from the publication date of this article. While celebrating city birthdays has fallen out of favor in a lot of jurisdictions, it would be wonderful for the city to consider finding a way to make the upcoming milestone something special. Perhaps a car parade down Flagler Street, or the reincarnation of a Welcome Arch could be a couple of ideas worth reinstituting from an earlier time.