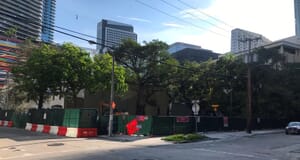 There was once a time when the Brickell neighborhood was known as a hardwood hammock. The term described the densely populated pine trees that dominated an area that is now better described as a concrete and glass condominium canyon. Don’t get me wrong, I believe that development and the preservation of natural resources can co-exist, but it seems as if only one side of that coexistence is being pursued in a neighborhood that was once known for its beauty and shade provided by that hardwood hammock.

While walking near the old Perricone’s restaurant location, I stumbled across a public notice indicating that the project being built on this site has decided to clear the lot of all trees in order

Figure 1: Oak Tree already removed. Picture of Duplex prior to Perricones in 1994.

to build a mid-rise hotel. The lot has already lost its most prominent oak tree when it was cut down because it was considered “in conflict with the footprint of a proposed multi-story hotel.” The tree I am referring was the iconic oak tree adjacent to the sidewalk in front of Perricone’s restaurant.

The latest notice indicates that a decision has been reached to remove, or relocate, the five remaining trees that are in “conflict with the footprint” of the hotel project. The very large tree on the back of the lot, a strangler fig, is one of the trees to be removed. It is likely that this tree predates civilization on Miami’s southside and has been on this lot for decades. It left such a strong impression on Steve Perricone that he decided to build his restaurant around the tree rather than cut it down. He found the mature strangler fig in the back yard of the duplex that preceded his restaurant when he leased the property in the mid-1990s. This tree will be cut down if the public does not appeal this decision. 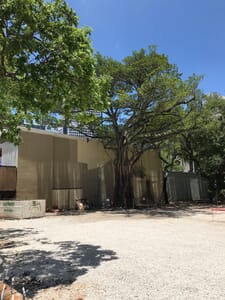 The other trees that will be cut down are two live oaks that are on the eastern side of the property. According to the Southern Oak Tree Farm, Live Oaks grow between 2 – 4 feet per year and can live for hundreds of years. It is likely both the trees earmarked to be cut down have been on the property for decades.

There are two trees that are earmarked for relocation. One is a Gumbo Limbo and the other another Live Oak. The proposal calls for moving both trees to Allen Morris Park, which is located to the east of the lot in question. However, the park can be taken back by the Allen Morris Company for development at any time. The land was granted as a temporary park by the company and it is possible that it will be taken back and developed soon. What happens to the relocated trees when the park space is cleared for development?

4” Dbh X 16’ Height Replacement Trees and / or the equivalent 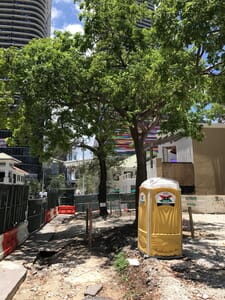 Figure 3: Trees to be Relocated.

There is no indication of where these trees will be placed. Will these trees be planted on the street level or will they be strategically located on an elevated pool deck?

Given how dense the tree canopy once was in the Brickell neighborhood, it is disappointing to see the area gutted of foliage and replaced exclusively with glass and concrete. It goes without saying that are summers are getting hotter and a lack of shade from trees will only make things worse. If there is a way that trees and high-rise condominiums can co-exist in Miami, our elected officials need to explore the options.

The City of Miami has a tree ordinance to protect trees from removal in situations just like this one. The hotelier knew of the tree ordinance when they purchased the land and should be held accountable to adhere to the city’s law. If you agree and live in the Brickell neighborhood, please reach out to Ken Russell’s office to object to the decision as it is outlined on the public notice. His contact information can be found by clicking on the link.