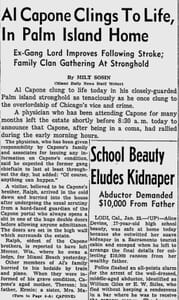 On January 25th, 1947, Chicago gangster Al Capone died in his Villa on Palm Island in Miami Beach, Florida. Capone had suffered a stroke caused by syphilis and was incapacitated until his death. The official cause of death was pneumonia, but his health problems were a culmination of complications from a long term illness caused by syphilis.

Following his release from jail in 1939 on a tax evasion conviction, Capone spent his last years primarily at his Palm Island home. It was said that Capone had the mental capacity of a twelve year old as his disease progressed. Capone would suffer a heart attack on Saturday evening, January 25th, 1947. His official time of death was 7:25pm Eastern Standard Time.

To the left is a Miami News Article reporting on Al Capone’s condition following his stroke on January 22nd, 1947. As he seemed to be on the road to recovery, he die a few short days later.

To read more about Al Capone in Miami, click on the 4 Part series on Miami-History.com: