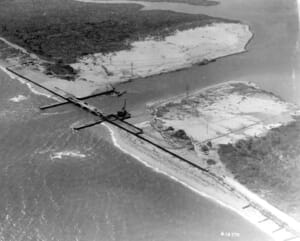 On December 19, 1882, the property known as Baker’s Haulover was purchased from the State of Florida by Elnathan T. Field and Ezra Osborn. The land is located on the north end of Miami Beach, between the cities of Bal Harbour and Sunny Isles.

Field and Osborn acquired land up and down the future Miami Beach for a coconut plantation. The duo paid from seventy-five cents to one dollar and twenty-five cents per acre for the Baker’s Haulover land.

The land was most likely named for Gardiner Baker who received a land grant from the Spanish King in 1804. The land grant was issued on April 28, 1804, for 550 acres of land along the Miami River on the condition of occupying, cultivating and erecting buildings on the land for at least ten years. 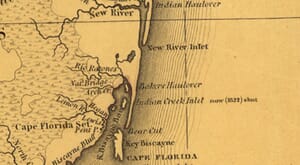 The name “Baker’s Haulover” can be found on a map of Florida as early as 1823. Folklore relates the story of a man named Baker who crossed from the bay to the ocean and back at a point that was shallow enough to “haul over” his boat.

The haul over point was at the location of today’s Baker’s Haulover Inlet. The inlet was carved in 1925 to connect Biscayne Bay with the Atlantic Ocean.

Read more information in the book “Baker’s Haulover – A Maritime Treasure of History and Pioneers”, by Martha Saconchik-Pytel.