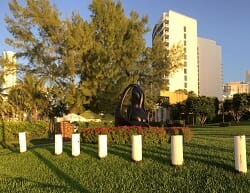 Brickell Key Park was never intended to be a park indefinitely. The Swire Group is requesting that the 2.4 acre park be re-zoned for a mix of residential and commercial use. The park was always considered to be a placeholder for the last phase of development on Brickell Key. The land is located at 750 Claughton Island Drive.

The Miami City Commission will consider the plan proposed by the Swire Group on October 8th. If approved, the only sizable green space on Brickell Key will disappear. The path around the key is a very popular run and walk route for Brickell area residents. Given the additional residents that the new development will add, Brickell Key will become a lot like Brickell Avenue in that pedestrians will need to constantly look down to avoid puddles of urine or, worse, piles of feces that resident dog owners refuse to dispose of properly.

The lack of vision by both the city and county commissioners to withhold land for green space is bordering on criminal. At the very least, small dog parks should have been set aside on every block being developed. Miami is already considered one of the biggest metropolitan areas with the least amount of green space in the United States. My advice to anyone walking downtown Miami or Brickell is to remember to keep one eye on the pavement. Otherwise, you may ruin a perfectly good pair of shoes. It sounds like the same advice will soon apply to Brickell Key.