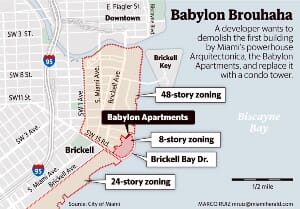 In the appearance of an effort to up zone the area of Brickell near the curve at Brickell Bay Drive, the city has declared the Babylon Apartments unsafe and condemned the building. The declaration will certainly lead to the demolition of one of the first buildings designed by Arquitectonica in the early 1980s.

The city planners would like to up zone the Miami 21 Code to allow for a building to reach 48 stories. The city planners and attorneys for Celeiro cite a mistake in the original code and believe that the area should have allowed for the same height restriction as the surrounding area. The city planning director at the time of the Miami 21 zone draft claims that there was no mistake and the area was deliberately zoned for a maximum of eight stories to match the old code.