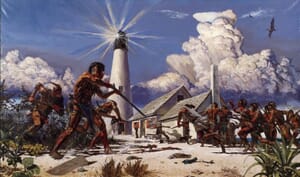 Cover: Painting of Attack of Cape Florida Lighthouse in 1836.

On January 6, 1836, the Cooley family was attacked by Seminole Indians at the New River in today’s Fort Lauderdale. The Indians killed everyone, but one young slave named Peter who made his way to the Miami River to warn the settlement along the river of what happened. The news led to everyone converging on the Cape Florida Lighthouse for protection and ultimately to be transported to Key West for safety.

The regular lighthouse keeper, John Dubose, took his family to Key West and refused to return until the United States sent soldiers to protect the area. This left John Thompson as the acting lighthouse keeper and his assistant, Aaron Carter, as the only people remaining to man the Cape Florida Lighthouse.

Below is a recap of what happened when Thompson and Carter were confronted by a large group of Seminoles a few months later as described in the book ‘Miami, The Magic City’:

“Late in the afternoon of July 23, 1836, as Thompson went from the kitchen to his dwelling house, he spied a large group of Indians about 20 yards away. He yelled for Carter to join him in the tower. With the Indians in hot pursuit, the two men barely made it inside. While Carter held the door, Thompson climbed the stairs and fired from the windows, keeping the Indians at bay until dark. Under the cover of night, the Indians lit a fire at the base of the tower. Fed by spilled lantern oil oozing from the bullet-ridden storage tanks, the fire spread quickly to the wooden doors and then ignited the wooden stairway. With flames roaring around them, Thompson and Carter climbed to the top the tower and out onto the two-foot-wide platform. The lantern itself was now full of flames, with the lamps and glasses exploding under the intense heat. Thompson, his flesh roasting, threw a keg of gunpowder down the tower, hoping to end their suffering. The ensuing explosion caused the burning woodwork to drop to the base of the tower and miraculously the fire went out. The Indians, believing that the men were dead, left the still-smoldering lighthouse and returned to the mainland.”

Aaron Carter died during this ordeal, but John Thompson, although wounded, did survive the confrontation. Fortunately, the fire caught the attention of the U.S.S. Motto which came to the smoldering lighthouse and rescued Thompson. He was taken first to Key West and then onto Charleston, South Carolina, to recover from his wounds.

The lighthouse stood damaged for ten years following the attack. In 1846 the lighthouse was rebuilt using some of the salvageable bricks from the former lighthouse along with bricks that were imported from Massachusetts. It was lit and re-opened in April of 1847.