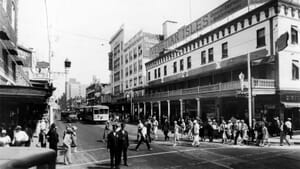 Prior to the plan submitted by Miami City Councilman Josiah Chaille, the city’s street names followed a pattern of letters for avenues and numbers for streets. The letters followed Biscayne Bay westward, beginning with the letter A, and incremented to the letter K at the city’s western boundary. The street names began on First Street on the city’s northern edge and incremented southward to Broadway Street at the southern boundary. Broadway is today SE Fifteenth Road.

The original address scheme fell out of favor as the city began to grow. There was the annexation of unincorporated areas to the north and west of the original boundaries in 1913, and the city had plans to expand even further as part of the growth anticipated in the 1920s. The limitations of the existing system were clear, and the only way to configure a naming convention that supported progress was to change to a grid system like Washington D.C. 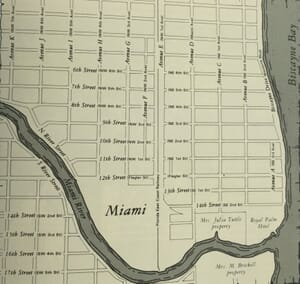 Josiah Chaille recognized this need and submitted a street naming proposal that was based on a quadrangle system of naming and numbering streets. The center of the quadrant was the former Twelfth Street and Avenue D, or the more familiar Flagler Street and Miami Avenue intersection.

The thoroughfares running east and west were “streets”, and those running north and south were “avenues”. The increment and directional rules also applied to avenues based on whether they were located north or south of Flagler Street.

One interesting observation associated with the complete overhaul of the street naming system was the fact that one street kept the same number that it had prior to the change. As Howard Kleinberg noted in Miami: The Way We Were: “despite the wholesale changes beginning with the base streets, Sixth Street on the north side of the river continued to be called Sixth Street through a mathematical quirk.” 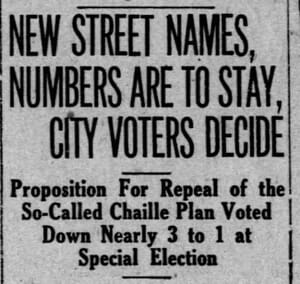 The plan was approved by the Miami City Council on October 6, 1920. However, there was a petition circulated in 1921 which forced a special election to give the voters a chance to repeal the Chaille Plan. The vote took place on June 28, 1921 and the repeal of the Chaille Plan was voted down by a margin of 3 to 1 by the city’s electorate.

Although the addresses began to change in November of 1920, it wasn’t until the plan was validated by voters that it was fully implemented. The 1922 Miami City Directory was the first published book with the new addresses and street names.

Although Josiah Chaille was a pioneer and developer of Wynwood and the Venetian Isles, and was also part of a family that founded one of Miami’s earliest retail shops (The Racket Store), he is probably best remembered for providing the street naming system that present-day Miami residents have gotten to know so well.