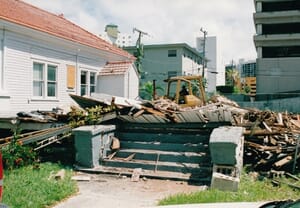 Despite a strong effort by Dade Heritage Trust to get designation, Dr. James Jackson’s former home was demolished on June 6, 2001. Becky Roper Matkov, Luis Penelas and the DHT board worked to preserve the home prior to the demolition date.

The structure was the former home of Dr. James Jackson, a pioneer physician for Miami. It was built in 1899 and moved to the Brickell neighborhood in 1916. The home was located at 186 SE 12th Terrace. 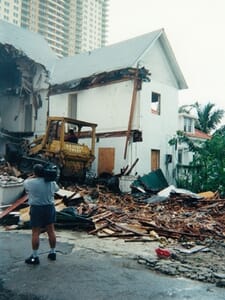 The demolition did impact the building to the east of the old Jackson home at 190 SE 12th Terrace. The former medical office of Dr. Jackson had already been given historic designation when debris from the demolition accidently landed on the office. The demolition company had insurance and repaired the damage.

Like so many other historic buildings in Miami, the Jackson home was a victim of the last building boom. The former historic home was replaced by the Solaris at Brickell Condominium building.