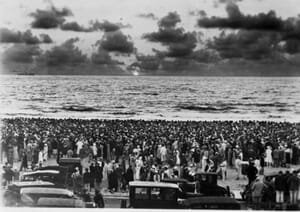 South Florida has always offered a unique experience to enjoy Easter. Temperate weather and miles of beachfront have always provided a beautiful vista for celebrating special occasions. The weather generally cooperates and provides thousands of people an ideal setting to celebrate the holiday with sand in their shoes.

On April 17, 1927, there was an estimated 20,000 residents and visitors who converged on Miami Beach for sunrise service. The following day, the Miami News described the convergence to the beach in the hours prior to sunrise on Easter Sunday:

Long before daylight, automobiles from the more distant communities on the fringe of the Everglades began their journeys beachward. By 5 a.m., Biscayne Boulevard north and south from the causeway approach was aswarm with cars, their headlights helping dispel the last mists of night. Fifteen minutes later, the Miami Beach police department had awakened to the most sudden and staggering traffic congestion in its history. Off-duty policeman were roused from bed and put to work and the jam was handled with dispatch. By 5:45 a.m., tardy arrivals found it necessary to park four and five blocks from the scene of the service. 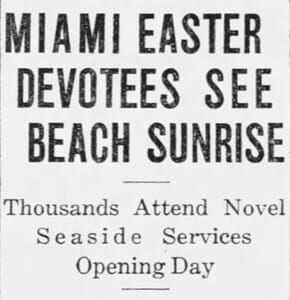 The communities on the “fringe of the Everglades” were much further east than we know them today. The article went on to say that this would be the beginning of a new annual tradition in South Florida. Attendees in 1927 must have felt that they were part of a ritual that would live forever.

While most Americans do not consider themselves as religious as prior generations, residents and visitors still converge on Miami Beach to celebrate Easter Sunday, what has been traditionally considered the end of the tourist season, with sand in their shoes. If anyone began their journey to the beach prior to sunrise today, it would have more to do with beating the crowd than attending the sunrise service. Regardless of the reason, it is nice to celebrate Easter Sunday in our slice of paradise.