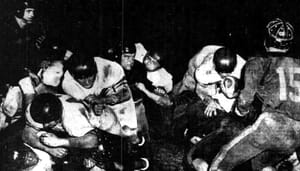 One of the longest standing traditions in Miami on Thanksgiving was the annual Miami High – Edison football games. The tradition began in 1925 and attracted more 30,000 fans to the Orange Bowl every year.  However, this annual matchup was dominated by Miami High the entire rivalry prior to 1952. There were several years that the two teams met more than once per season which allowed Miami High to boast a thirty-one-game win streak headed into this game. From the onset of the rivalry, Edison had never experienced victory until the 1952 season.

Although the fans and football program shouldered the weight of the past, there was a different aura of confidence for the Edison Red Raiders headed into the 1952 matchup. Edison had a 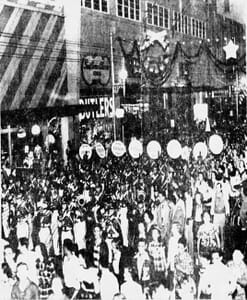 player that the Miami News referred to as “one of the greatest high school players in Miami’s history” in Jack Simpson. He was a two-way player that was an outstanding running back and a very effective safety on defense.

As the Edison High fans filled in the north side, and Miami High fans took their seats on the south side of the Orange Bowl, there were 31,391 fans ready for another edition of the cross-town rivalry. However, the game played on Thanksgiving night, November 27, 1952, was largely a one-sided affair as Edison looked for redemption after nearly three decades of losing in this game. The hero for the Red Raiders was their star player. Simpson gained 113 of Edison’s 243 yards, scored all three of Edison’s touchdowns, punted brilliantly and got an interception while playing safety.

When the final siren sounded, the score was Edison 21 and Miami High 7, and the Red Raider’s student section rushed the field and tore down the goal posts. The grounds crew had to keep track of what was being ushered out of the stadium because they knew that they needed to setup for a University of Miami game the next day. 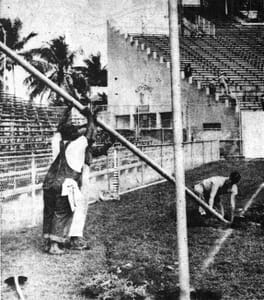 and in downtown Miami. Some of fans built a bonfire at the intersection of NW 2nd Avenue and 62nd Street. The fire burned the wiring around the light and put it out of commission, which required the police to step in and direct traffic until 6:00AM.

Prior to 1952, the Edison alumni had filed for a parade permit in the event they could finally celebrate a victory. In all prior years, they were forced to tear up that permit in frustration. When they finally got the opportunity to celebrate with a parade in downtown Miami, the Red Raider fan base made the most of their moment. The band played and the fans filled Flagler Street well into the night. It was a night that Edison High old-timers will never forget.