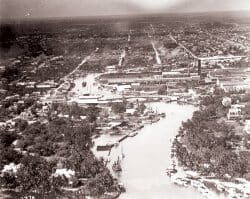 The Miami River has always been the centerpiece of the City of Miami. The serpentine body of water has been significant to the inhabitants of its banks for over 10,000 years. From the Tequesta tribe to modern day Miami residents, inhabitants have built thriving communities in proximity to the river.

The Miami Herald takes a brief look at the evolution of life along the Miami River over the last 50 years or so. Despite the flight out of the downtown area of Miami in the 1960s and 70s, recent times have seen a migration back to the downtown area. The Miami River has been central to the return of community in Miami. In the article, Dr. Paul George describes the river as: “That’s where it all started. With the flight of the suburbs, it lost its luster for a while, but there’s been a resurgence of interest”.

While a lot of attention has gone into the resurgence of the Brickell neighborhood, formerly referred to as South Side, downtown and areas north, keep an eye on the growing community around the Miami River. The river is where everything began in Miami, and it will continue to be the centerpiece of how this most recent resurgence will evolve.

Read the story at the Miami Herald