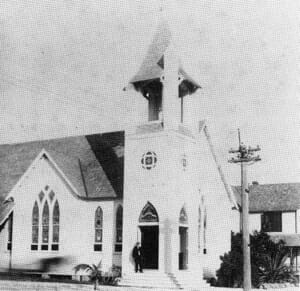 On November 24, 1901, the First Baptist Church conducted its first service in their new church on the corner of today’s NE First Avenue and NE Fifth Street on land donated by Henry Flagler. This was the first of three different church structures that were built on this corner for what is now Central Baptist Church.

The congregation organized on July 26, 1896, two days prior to the incorporation of the City of Miami. John Sewell was one of the founding members of First Baptist. The chapel that opened in 1901 was deemed too small by 1916 and it was replaced by the second chapel, which offered a seating capacity of eighteen hundred people. The 1901 church was moved to Buena Vista and was renamed the Stanton Memorial Baptist Church. The relocated chapel conducted its first service on January 7, 1917 at its new location in Buena Vista.

In April of 1936, First Baptist consolidated with Temple Baptist to form the Central Baptist Church. The combined congregation conducted services at the third church building at NE First Avenue and NE Fifth Street, which opened in February of 1928. This building was placed on the U.S. Register of Historic Places on January 4, 1989 and was awarded local historic designation in October of 1998.