On April 1, 1896, the First Presbyterian Church became the second organized congregation to be founded within the boundaries of what would become the city of Miami on July 28, 1896. The first church founded within the city limits was the Greater AME Bethel Church which was organized in the home of Miami pioneer Alexander C. Lightburn on March 12, 1896.

The service on April 1 was conducted in a tent near the Miami River along Avenue D. Avenue D was later renamed Miami Avenue.

Henry Flagler donated land and money to build a church in 1898. It stood at today’s Flagler Street and S.E. Third Avenue. The construction of the church was completed in 1900. 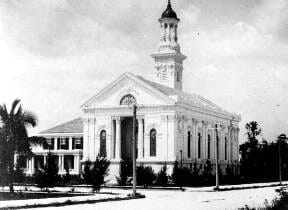 By 1947, First Presbyterian needed more space and relocated to 609 Brickell Avenue. The new church on Brickell Avenue was completed in 1949 and the congregation has remained at this location to this day. Part of the church from the downtown structure was relocated to the Brickell location and integrated into the Flagler Chapel.