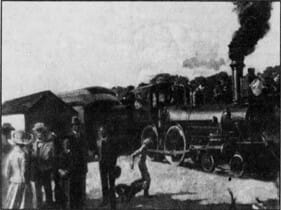 Artist rendition of first train that arrived in Miami on April 13th, 1896.

On April 13, 1896, the first FEC locomotive arrived in the yet to be incorporated City of Miami. The arrival of this train represented the completion of the FEC extension to Miami. The train carried supplies and dignitaries. The first official passenger train arrived in Miami on April 22, 1896.

Henry Flagler, as well as other railroad and hotel dignitaries, were on the train that arrived on April 13th. The entire town, about 300 people at that time, came out to greet the train. J.N. Lummus commented that the train “puffed its way into the village over wobbly tracks”. The temporary train station was in the vicinity of today’s Miami-Dade County Courthouse.