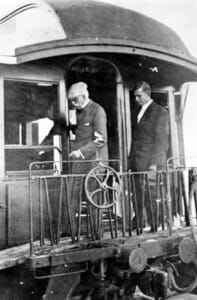 On January 22, 1912, Henry Flagler arrived in Key West on the FEC Overseas Railway. The Overseas Extension was the culmination of 8 years of work and connected the railway from Miami all the way to Key West. This project was referred to Flagler’s Folly by friends and the media alike.

On May 20th, 1913, a little more than a year after he arrived in Key West on his train, Henry Flagler passed away at the age of 83 in his Palm Beach home. Flagler lived a very full life that consisted of many memorable milestones. There may not have been one that meant more to him than the completion of the Overseas Railway to provide train service all the way to Key West.