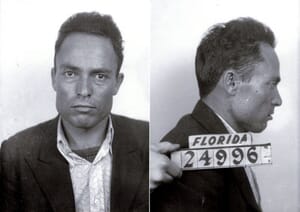 On March 20th in 1933, Giuseppe Zangara was electrocuted at Raiford for the murder of Anton Cermak in his assassination attempt of FDR in Bayfront Park. Zangara’s intent was to assassinate Franklin Delano Roosevelt the night he shot Anton Cermak. Anton Cermak was the Mayor of Chicago.

Giuseppe Zangara was a part time bricklayer, tour guide and drifter. However, he was a full-time cynic who blamed his problems on world leaders. His rhetoric was largely ignored by most, but was always targeted at getting retribution for all the pain in his life. He suffered from chronic stomach pain. Zangara’s errant shots hit just a few people, but ultimately had deadly consequences for Cermak.

The justice system was very expedient for Guiseppe Zangara. From the night that he fired shots until his execution at Raiford, only 33 days had passed. His last words were as impulsive and defiant as his decision to take out his stomach pains on the president-elect. He simply said “Pusha Da Button”.