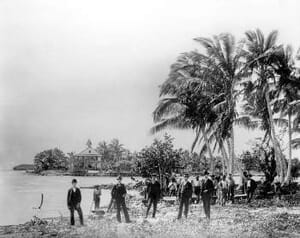 Miami Pioneers during the Groundbreaking in 1896

On March 15 in 1896, Reverend A.W. Brown turned the first shovel of dirt for the ground breaking for the building of the Royal Palm Hotel. Reverend Brown was one of 12 men, and part of John Sewell’s crew of workers, responsible for clearing the grounds for Miami’s first grand hotel.

Sewell’s men leveled a burial mound and disposed of the remains interred in the burial mound by placing some in barrels and burying the containers in close proximity to the grounds of the hotel. Archaeologist Bob Carr, in his book “Digging Miami”, concluded that the mound was leveled not to make room for the building of the hotel, but to eliminate an obstruction that would have blocked the view of the bay for hotel guests.

The burial mound included the remains of generations of Indians, as well as, soldiers from Fort Dallas when the area operated as a military post. Had there been a culture of curiosity and interest in history during this time, the burial mound would have been a treasure of artifacts and remains to better understand the long history of people around the mouth of the Miami River and surrounding area.