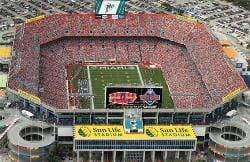 After another slow start for the Miami Dolphins, WSVN reported that the explanation for the poor start could be due to a Tequesta curse on the Miami Dolphins. Historian Dr. Paul George shared that the location of what was once called “Joe Robbie Stadium” was built on was an Indian burial site.

The Ocala Star broke a story in May of 1985 indicating that ancient remains were found during excavation of the land that would eventually be the location of the Dolphin’s new stadium. By state law, the site required an excavation by archaeologists. The archaeologists uncovered about 25,000 Indian artifacts, including 3000 year old stone arrowheads. The findings of the excavation were detailed in the Dayton Beach Sunday News-Journal on December 15th, 1988.

Whether the Miami Dolphin’s lack of success at what is now called Sun Life Stadium is the product of a curse or bad management, it is clear that the location of the stadium served an important location for both the Tequesta and Seminole Indian tribes. Many of the artifacts found at the Dolphin Stadium excavation site can be found at the HistoryMiami museum.

Read the story at WSVN News