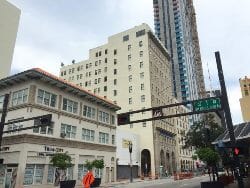 The Langford Hotel, located at 121 SE First Street in downtown Miami, is nearing completion. It is expected to open this winter. The exterior is finished and the interior is mostly finished. The Langford building is on the National Historic Register. It was built in 1925 and was occupied by the Miami Bank and Trust Company. The bank went out of business following the hurricane of 1926 and was taken over by the J.C. Penney City National Bank and the building was known as the City National Bank Building.

When it opens, the Langford Hotel will feature two restaurants. The one on the lobby level will be PB Station and run by the Pubbelly Group. There will also be a roof top restaurant with an outdoor dining terrace. The building is unique in that it also features a small basement.

Read the story at Miami Curbed