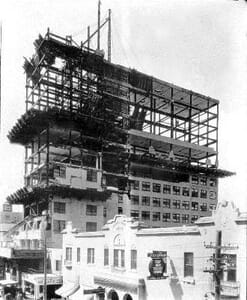 Meyer-Kiser Building being rebuilt in 1927

Formerly known as the Meyer-Kiser Bank Building, the Dade-Commonwealth Building recently changed owners when the $9.2 million sale to a joint venture between Immocorp and the Wynwood Fund closed late last week. The 43,265 square foot tower sold for $212 per square foot. The building is located at 139 Northeast First Street, which is midway between Northeast First and Second Avenues.

The Meyer-Kiser Bank Building was built in 1925 and opened its doors on March 3rd, 1926. It was originally 17 stories. The 1926 Hurricane damaged the building so badly that the reconstruction of the building eliminated the top ten stories and it became a 7 story building upon repair and reopen.

The article mentions that the new owners plan on “redeveloping the property”, although it isn’t clear what that means. The building possesses a number of original elements including a 32-ton steel safe and a lot of the original tile and building materials. Hopefully, the joint venture will honor its historic designation and plan on renovating rather than replacing the building.