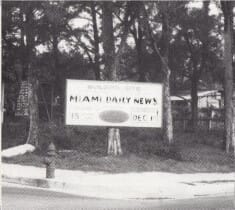 Cover: Lot for Miami Daily News Tower in June of 1924

On the morning of June 11, 1924, workman began clearing pine trees that covered the lot at NE Sixth Street and North Bay Shore Drive in downtown Miami. Bay Shore Drive was later renamed to Biscayne Boulevard. The lot was cleared to make room for the new headquarters of the Miami News Tower.

Soon after purchasing the Miami Metropolis, James Cox renamed the paper and decided to build a new and distinctive headquarters for his investment. Cox chose Bay Shore Drive because he knew that this road would eventually be the great boulevard for the young City of Miami.

The tower was patterned after the Giralda Tower in Seville, Spain. It was designed by architectural firm Schultze and Weaver. The firm also designed the Biltmore Hotel in Coral Gables, the Ingraham Building in downtown Miami and the Breakers Hotel in Palm Beach. 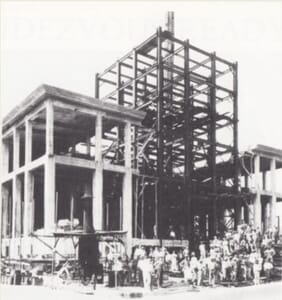 The tower remained the headquarters for the Miami Daily News until 1957 when the paper moved their operations near the Miami River at NW 10th Avenue. Several years after the News left the tower, the building became a center for refugees fleeing Communist Cuba. Given the role of a refugee service center for Cubans, the tower was renamed Freedom Tower. The building was placed on the National Register of Historic Places in 1979.