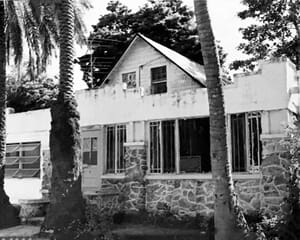 On October 27, 1933, Rose Wagner Richards died at the age of 81. Rose was part of the Wagner family who arrived in what would become Miami in the mid-1850s. The Wagner home, which was built at today’s address of 1145 NW 8th Avenue in 1857, was later moved and still resides in Lummus Park in Miami.

In an article that was published in 1903, Rose gave an account of what Miami was like during the Civil War. She described how the area was restricted by a Union Blockade that patrolled from Key West up to Indian River. Rose described how the few that lived in the area had to either grow what they needed to survive, or find a way to get through the blockade.

The article also discusses how the blockaders would deal with southern sympathizers. Boats would be confiscated, soldiers would insist that residents pledge allegiance to the north and, in one case, a factory and home were burned to the ground. Rose’s account of the Civil War time period was one of the few oral histories that described the Miami River area during this turbulent time.