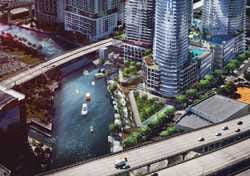 The mixed use project that will be nestled between Northwest 2nd Avenue and I-95, on the south bank of the Miami River, will consist of 4 towers of between 58 – 60 stories in height. The project will also include hotel, offices, retail and restaurants. In addition to the east and west borders outlined above, the project will extend from the river on the north all the way to 7th Street on the south.

The name of the project will simply be called Miami River. This project also promises to commit $21 million in public benefit improvements within the River District. This would include money for improvements to Jose Marti Park.

Part of the land for the Miami River project used to be home to the Atlantic Marine Boat Yard for many years. In the early 2000s, some of that land was the location of the Finnegan’s on the River restaurant and bar.