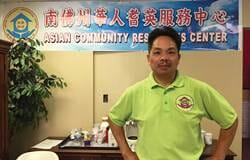 The very first Chinese to migrate to Miami came to work on the railroads. In the late 1950s, Cuban Chinese migrated to Miami for political asylum. Since that time, other Chinese have migrated from other parts of South American to Miami. More recently, there is a big push to attract others from mainland China to build a Chinese Hub to Latin America.

The Asian community represents 1.7% of Miami-Dade’s population. Johnson Ng established a Chinese newspaper in South Florida about 15 years ago. He was born in Hong Kong and arrived in Miami in 1992. He sees room for opportunity in Miami for a Chinese Hub.

Typically, growth of the Chinese population would generally rally around a central “Chinatown”. While there was an attempt at creating a Chinatown on Flagler Street in the past, it never took off. There even was an article that appeared in the Miami News in December of 1976 that suggested that the tower could be offered as a vertical Chinatown. The idea never materialized. 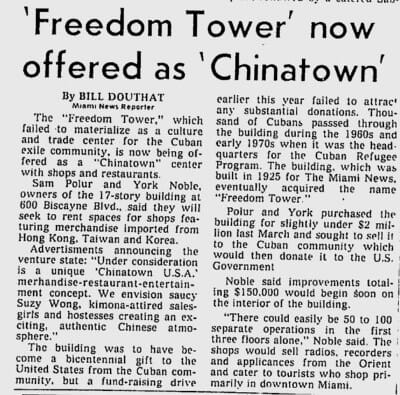 Freedom Tower offered as Chinatown in 1976