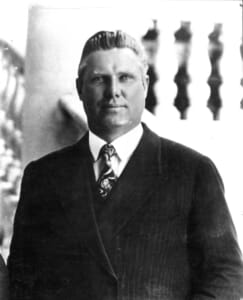 On March 26 in 1942, George Merrick, planner and developer of Coral Gables, passed away from a heart attack at Jackson Memorial Hospital. He passed away at 2:30 in the morning. George was fifty-five years old. His heart condition was the same ailment that had taken the lives of generations of Merrick men before him.

Just prior to his illness, Merrick was working as the postmaster for the City of Miami. One of his responsibilities as postmaster was to ensure the efficient operation of registration for the draft. He was working long days until his health began to fail.

By the beginning of 1942, George had begun to do something he had never done in his life, which was miss work due to illness. His deteriorating health began to get worse and on March 20th, his wife Eunice sent for a doctor. The doctor immediately put him into Jackson Memorial Hospital. He remained there until his death on March 26th.