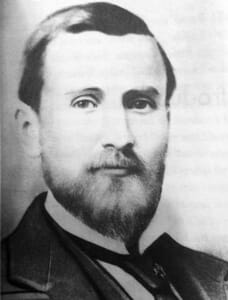 On February 1, 1911, the founder of Burdine’s Department Store, William Murrah Burdine, passed away. Burdine, a confederate soldier during the Civil War, took a chance on a young city during the Spanish American War in 1898. He sent his son John to sell dry goods to the soldiers stationed in Miami and was pleasantly surprised when all of his merchandise sold out very quickly.

William Burdine chose to move his family permanently to Miami in August of 1898 according to an announcement posted in the Miami Metropolis. His store initially operated on Avenue D (later called Miami Avenue). However, the store location would later move to 12th street (later called Flagler Street). The name of his business was originally W.M. Burdine & Son. Many years later, Miami residents would know the store simply as “Burdines”.

William Burdine had a life long struggle with illness. In the summer of 1904, the sixty year old Burdine entered a sanitarium in Summit, New Jersey, for an undisclosed illness. He recovered from that incident but had succumbed to illness on February 1st of 1911. At the time of his death, his business was arguably Miami’s premier store.

To Read More about William Burdine and the Burdine Family, check out “Burdines: Roddey Burdine, His Family and Their Namesake Store”, by Paul S. George.

Another good book on Burdines is “Burdines: Sunshine Fashions & the Florida Store”, by Seth H. Bramsom.