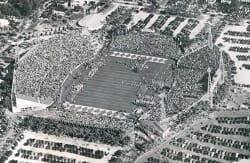 On February 15, 1936, Roddey Burdine, Miami’s Merchant Prince and Chairman of Burdines Department Store, died at St. Francis Hospital on Miami Beach of encephalitis. He was only 49 years old. Burdine’s illness was said to have been from drinking non-pasteurized milk.

Burdine was an icon in the Miami business community and the news of his death hit the entire city very hard. Shortly after his death, the Miami City Commission voted to rename a new football facility, the future Orange Bowl, “Roddey Burdine Memorial Stadium”.

To Read More about Roddey Burdine and the Burdine Family, check out “Burdines: Roddey Burdine, His Family and Their Namesake Store”, by Paul S. George.