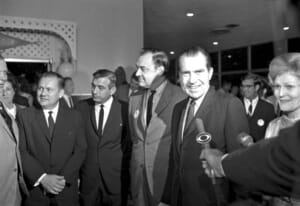 Nixon was nominated on the first ballot with 692 votes to 277 for Nelson Rockefeller. Ronald Reagan received 182 votes during the nomination process.

During the general election, Nixon labeled himself the “law and order” candidate and argued that he represented the “silent majority”. Nixon won the presidential election over Democrat Hubert Humphrey and Independent George Wallace on November 5, 1968.

Four years later, both the Democratic and Republican parties chose the Miami Beach 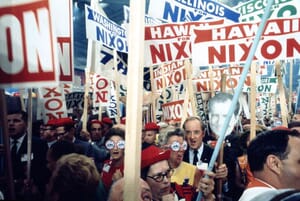 Convention Center to host their conventions. Both conventions in 1972 were targeted for widespread protests. The tension of the protests outside of the Republican Convention was captured in an independent documentary called “Four More Years”.