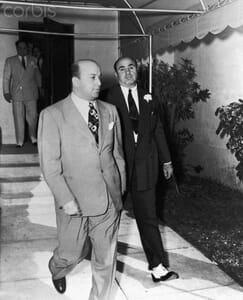 Ironically, Al Capone’s son got married at the Church that was made possible through the generosity and sale of land by Carl Fisher. Fisher was one of Capone’s biggest detractors and had led a strong push to run him out of town in the late 1920s and early 1930s.

Capone’s son was married on December 30th of 1941. The image is of Al Capone walking out of Saint Patrick Church following the wedding ceremony.

Image of Church in 1933 from Florida Memory

Image of Capone leaving church in 1941 from Florida Memory