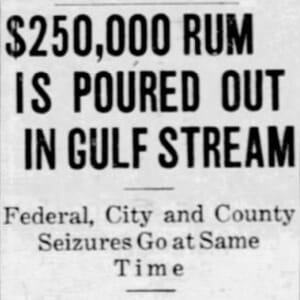 On July 13, 1927, a Miami News headline reported that a seizure of $250,000 in illegal contraband was poured into the gulf-stream as part of a crackdown during prohibition. The first paragraph of the article read: “Federal, city and county governments Wednesday were having a first-class liquor party.”

In addition to the inventory that was discarded in gulf, the article said that a veteran prohibition raider, “Uncle” Charlie Water Standau, held an order to destroy 2,000 of the 20,000 sacks held under lock and key in his cellar at Withers storage plant. The sacks of liquor were carted out and dropped in the incinerator for destruction. The article stated that the total inventory of liquor was estimated at one million dollars in value.

Miami was considered one of the leakiest places in America during prohibition. National prohibition went into effect in 1920 and lasted until 1933. However, prohibition began in Dade County in 1913 when the county voted itself dry on a rainy October that same year. 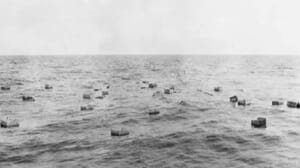