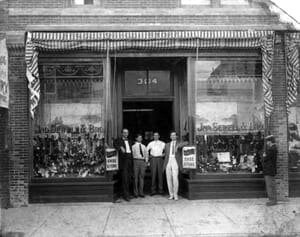 On March 26, 1896, the first store in downtown Miami was opened by John and E.G. Sewell. The store was located on 12th Street which was renamed Flagler Street in 1920. The Sewell brothers had hoped to be the first to open a store in the newly incorporated City of Miami, but delays in finishing 12th street also delayed the opening of their store.

The store was a shoe and men’s furnishing store. Within eight hours of the opening of John Sewell & Brother, J.E. Lummus opened a shoe and merchandise store in a shed to become the second retail establishment in downtown Miami. 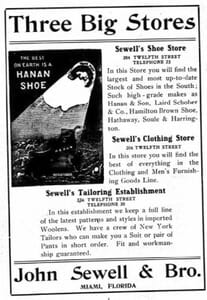 River, they were not the first pioneer merchant to open a store in Miami following incorporation. Isidor Cohen opened his store on the south side of the Miami River shortly before the Sewell’s opened their store.

Soon after opening his store and realizing that there was not enough foot traffic to sustain his business, Cohen moved his store to 12th street

to join what was fast becoming the business district. Cohen’s store was located across the street from one of the Sewell’s three establishments.

The Sewell Brothers would ultimately maintain three separate stores on Flagler Street. Each of the stores catered to men for items such as custom suits, clothes and shoes. The ad attached to this article was from the 1907 Miami City Directory and provides an explanation of the differences between the three stores.