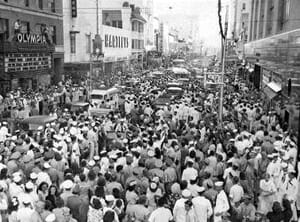 Flagler Street in 1945. Dupont Building on the right, from FloridaMemory.com

An article in the Miami Herald recalls the experience of a Western Pennsylvania woman who served in the Coast Guard in Miami during World War II.  She was part of a unit whose responsibility was to spot German submarines off the South Florida coast.

Clara Green, now 90, was part of the Women’s Reserve of the Coast Guard, which was created in 1942 by Franklin D Roosevelt. Although she only served during the last year of the war, she had very fond memories of her time in Miami.

Green remembered taking the Trolley to the Dupont Building on Flagler Street where she worked in the Admiral’s office from 9 – 5. However, part of her job was to go to the 14th floor of the building to keep an eye on the bay through a high powered telescope.

Like so many veterans who served in Miami during WWII, she met her spouse while serving in the Magic City. While she left the area after the war, Green and her husband returned to Miami to raise their family.

Read the article at the Miami Herald