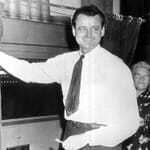 In the middle of the Twentieth Century, it was believed that election to a US Senate seat was virtually a guaranteed job until a candidate chose another office or retired. This was especially true of Democrats representing southern states. Claude Pepper first took office as Florida’s Senator in 1936 and easily won reelections in 1938 and 1944.

However, a young upstart graduate of Miami High (Class of 1932), and University of Florida challenged Claude Pepper in 1950. The election for the Democratic nomination was very contentious. Smathers conducted an attacking campaign to win the election. Author James C. Clark described Smathers as employing McCarthyism before the Senator from Wisconsin employed such tactics.

The Riches of Central Florida Podcast interviews the author of “Red Pepper and Gorgeous George” in a podcast attached to this article. Enjoy the insightful interview of James Clark regarding the Florida US Senate Election of 1950.

Listen to the Riches of Central Florida Podcast