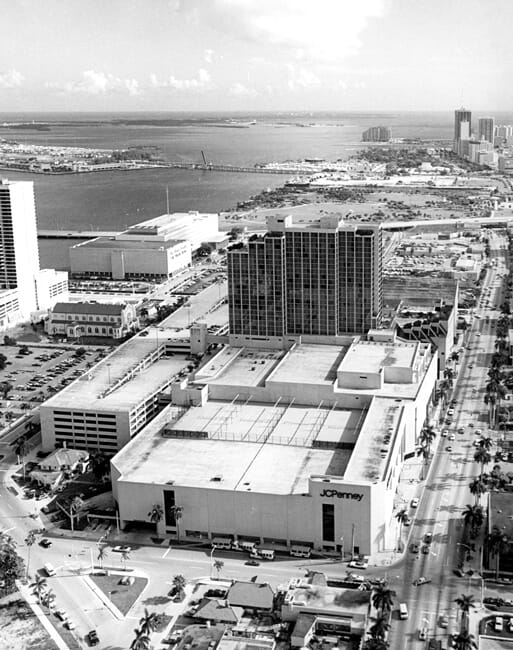 The featured photo is an aerial view of the Omni Mall in the early 1980s. The picture was taken a few years after the mall opened. The photo was taken looking north to south from the mall.

At the bottom of the photo is one of two anchor retail tenants of the Omni Mall. JC Penney opened at this location in 1978 and remained open until 1998. Not seen in the photo, and located at the opposite end of the structure, was Jordan Marsh.

Burdines took over the location for Jordan Marsh after it filed for bankruptcy, but only operated out of Omni Mall for one year. Corey Watson, the senior vice president of marketing for Burdines, said “we didn’t need two stores in downtown Miami and this one wasn’t doing particular well”. Burdines closed the store in May of 1992.

The Miami International University of Arts and Design is now located at the southern end of what was formerly the mall. The U.S. Passport Agency is also a current tenant of the building. The tallest building in the mall was originally the Omni Hotel. However, the hotel changed brands six times before becoming the Hilton, which is the brand at this location today.

The church to the left of the Hilton, on Bay Shore Drive, is the Trinity Cathedral. The congregation began services on June 12, 1896. The church was founded more than a month before the City of Miami was incorporated on July 28, 1896. In July of 1925, it moved into the building seen in the picture. The church was put on the U.S. National Register of Historic Places on October 10, 1980.

South of the church was One Herald Plaza. The home of the Miami Herald began construction on August 19, 1960. The newspaper moved into the building on March 23, 1963. It was designed by Chicagoan Sigurd Naess. The design was a fine example of Miami Modern (MiMo), architecture. 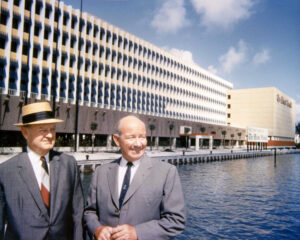 The Herald building was slowly torn down beginning in 2014. The demolition took more than a year to complete. The location is currently an empty lot. The Genting Group purchased the building and property in 2011, and had hoped to build a casino along Biscayne Bay. The future use of the property is unknown at this time.

In the middle of the photograph was Bi-Centennial Park. The park was dedicated in 1976 as part of the nation’s bi-centennial celebration. The park got its name in honor of the milestone. The property was the former location of the port of Miami before it moved to Dodge Island in the early to mid-1960s. The land was later renovated and dedicated as Museum Park on June 14, 2014.

In the late 1990s, the area that appears to be white sand was used for the home of the Miami Heat. The American Airlines Arena was inaugurated on December 31, 1999, with a concert from Gloria Estefan. Two days later, the Miami Heat played their first home game in the new arena.

Near Bayfront Park and along the west side of Biscayne Boulevard was Miami’s skyline of the 1970s and 80s. Some of the prominent buildings included: Biscayne Terrace Hotel, Everglades Hotel, Miami Colonial Hotel, New World Tower, Columbus Hotel, McAllister Hotel and One Biscayne Tower.

In the distance is the sparsely developed Brickell Key on Claughton Island. The Mandarin Oriental was nearing completion, but most of the island was developed after this picture was taken.