Avenue 3 is a short street long on historic context for the young City of Miami. It has been referred to as Avenue A, NE Third Street, Short Street, and most recently Avenue 3. Spanning only two blocks, the thoroughfare is unique in relation to the other avenues in Miami’s street grid layout, each of which are much longer in distance than Avenue 3. The uniqueness of this avenue led locals to refer to it as ‘Short Street’.

Its proximity to the original shoreline made for an ideal location for city pioneers to construct their first homes in the burgeoning city. Avenue 3 was Miami’s first upscale residential street which included the homes of William Burdine, founder of “The Florida Store”, James Leaming, builder of the Leamington Hotel, and E.A. Waddell, the city’s first real estate agent, just to name a few early residents. 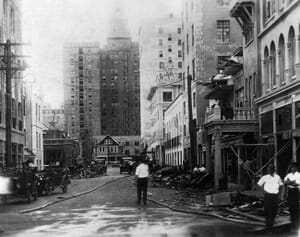 The quaint avenue was the preferred path of the stagecoach that transported guests from the original train station, near today’s Freedom Tower, to Henry Flagler’s Royal Palm Hotel. The southern terminus of the avenue led directly into Royal Palm Park, the FEC’s private park where residents would enjoy recreational events and welcome celebrities of the gilded age as they arrived at Miami’s first luxury hotel.

Avenue 3 was more than a street to early Miamians and tourists; it was a destination. While it began residential, it quickly changed as commercial buildings replaced homes in the 1910s and 1920s. The second decade of the twentieth century experienced a building boom that changed the landscape of downtown Miami for good. Perpendicular to Flagler Street and parallel to Biscayne Boulevard, Avenue 3 was consumed into part of Miami’s early skyline. The upscale residential street was quickly converted to a downtown commercial thoroughfare. 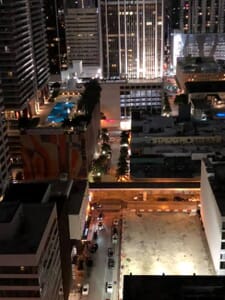 Today, there is a community-driven effort to bring back this once historic street to its original luster. The goal of the Avenue 3 project is to upgrade and bring attention to a forgotten street.

Note: This article is also posted on Downtown News.