This is a photograph of the intersection of Avenue C (SE First Avenue), and Thirteenth Street (SE First Street), looking south in roughly 1910. The exact date of the photograph is not known, but given the objects in the photograph, this author estimates the photograph to have been taken between 1906 and 1911. The street names reflect the address scheme prior to 1920, therefore, today’s downtown road designations are in parentheses.

The northwest corner of Avenue C and Thirteenth street would become the site location of the Ogden Theater Building in 1916 when William Ogden constructed a structure to house both a hotel and theater that would stretch from the corner for a half of block northward, and a half block westward. Ogden was insistent that the large oak in the picture was not removed from the corner, which required the building to be constructed around the tree. 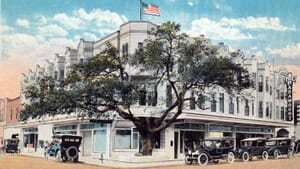 Figure 1: Postcard of Paramount Building in 1917

The Ogden Building was leased by the Paramount corporation in December of 1916 at which time it was referred to as the Paramount Hotel and Theater building until the organization moved to a new location on East Flagler Street in the mid-1920s. The theater at 24 SE First Avenue became the Roxy Theater in 1932 when it debuted a movie called “Sporting Blood” starring Clark Gable. The theater was open at this location until the mid-1940s. The building that once housed these early Miami institutions still stands today on the same corner. Although the façade has changed dramatically, the base structure remains on the northwest corner of SE First Avenue and SE First Street. 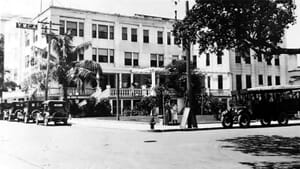 The Fort Dallas Hotel transitioned into Miami’s first YWCA in 1919. The recreation center operated out of the former Fort Dallas Hotel until the organization relocated in the mid to late 1950s to the Julia Tuttle Hotel, which was located at the terminus of Avenue C along the Miami River.

To the south of the two buildings in the foreground on the right, the gate posts for the entrance to Fort Dallas Park can be seen in the distance. This was one of Miami’s earliest upscale residential subdivisions as platted by Julia Tuttle’s son, Harry, in the early 1900s. The residential quarter would eventually give way to a hotel and apartment building district beginning in the late 1910s. Today, located to the west of the Hyatt and Miami Convention Center, the former Fort Dallas Park is comprised mostly of an exit overpass from I-95 and surface parking.