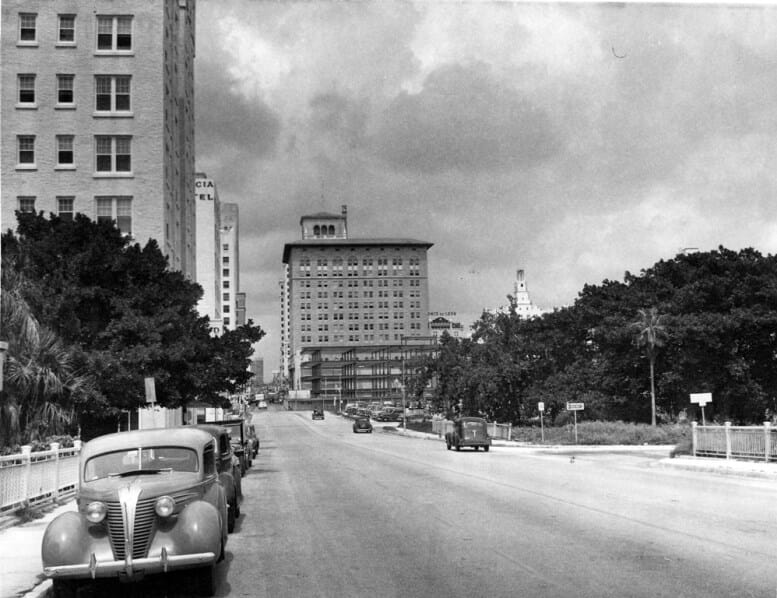 This is a picture taken on Brickell Bridge looking north on September 17, 1948. In the distance, one can see the Ingraham Building located on SE First Street and SE Second Avenue. In front of the Ingraham Building is the construction site of the Model Land Company garage and office building on the corner of SE Second Avenue and SE Second Street. In an article in the Miami News on September 5, 1948, it was described as the “largest job underway” in Miami at that time. The article went onto describe the building as: “L-shaped, fronting 138 feet on SE 2nd avenue, 227 feet on SE 2nd street and 89 feet on SE 1st street”. It was designed to wrap around a structure that was located on the southeast corner of SE Second Avenue and SE First Street. This building still stands today at 229 SE Second Street in downtown Miami. 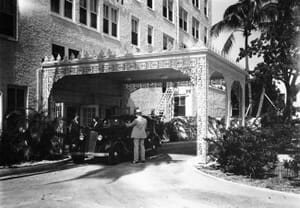 To the right and partially covered by the Ingraham Building is the Ponce De Leon Hotel located on Flagler Street. This is the hostelry that provided accommodations for Al Capone when he first arrived in Miami in December of 1928. He rented the penthouse prior to purchasing 93 Palm Avenue on Palm Island. 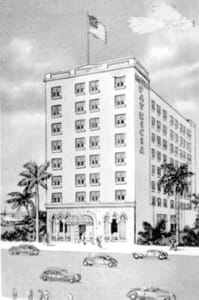 The Patricia Hotel was constructed in 1925-26 and opened for the winter season of 1926. It was one of several hotels residing in the Fort Dallas Park hotel district. The Patricia was razed in 1979 and sat just south of today’s Marriott Courtyard where the on-ramp to I-95 begins on SE Second Avenue in downtown Miami.

The undeveloped land on the right side of the photograph would become the Dupont Plaza Hotel and Office building two years after this photograph was taken. The Dupont complex was built in 1950. That land was once part of the Royal Palm Gardens that provided a beautiful backyard to Henry Flagler’s Royal Palm Hotel.