This photograph was shot at the end of Southeast Thirteenth Street, just east of today’s Brickell Bay Drive, along the Biscayne Bay shoreline on March 4, 1952. The picture was taken by Dr. Fuad Hanna, a Brickell resident and physician, who owned the property at the time. 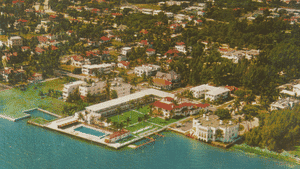 In the background, from left to right, one can see the South Bayshore Drive Apartments, which were built by Fred and Dora Brown in 1922. The apartment building was originally named the Fredora Court Apartments, structured to combine the first names of the couple who constructed the building. In the foreground, one can see an inlet being bulkheaded, which served as a makeshift boat dock for the residents of the apartment complex.

Further into the distance, one can see the Ocean Ranch Motel. The hostelry was built by Harry Dewitt in the late 1940s and was fondly remembered by those whose families vacationed in the mobile lodge in the 1950s and 60s. Many local residents also enjoyed events that were hosted at the Ocean Ranch. Students at the nearby Assumption Academy and Miss Harris School learned 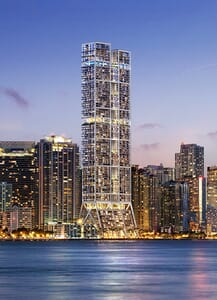 Figure 3: Rendition of Towers by Foster

to swim in the motel pool.

Ironically, it was the raucous party atmosphere at the motel’s bar that was one of the reasons that prompted Julia Harris to move her school from the Brickell Avenue neighborhood to Palm City, Florida in 1957. Miss Harris School was located a block north of the motel.

The postcard provides an aerial view of the land that was once owned by Dr. Hanna, along with the South Bayshore Drive Apartments and the Ocean Ranch Motel. Today, the land that once hosted both the apartments and motel is a two and a half acre parking lot waiting for the start of what will become the tallest building in the eastern time zone, south of New York City. It will feature two inter-connected towers that will rise to 1,049 feet in height and consist of 660 ultra-luxurious residences per the project’s web site. The towers will include a pedestrian plaza with shops, restaurants, and art galleries. There has been no timeline given for the start of this project.