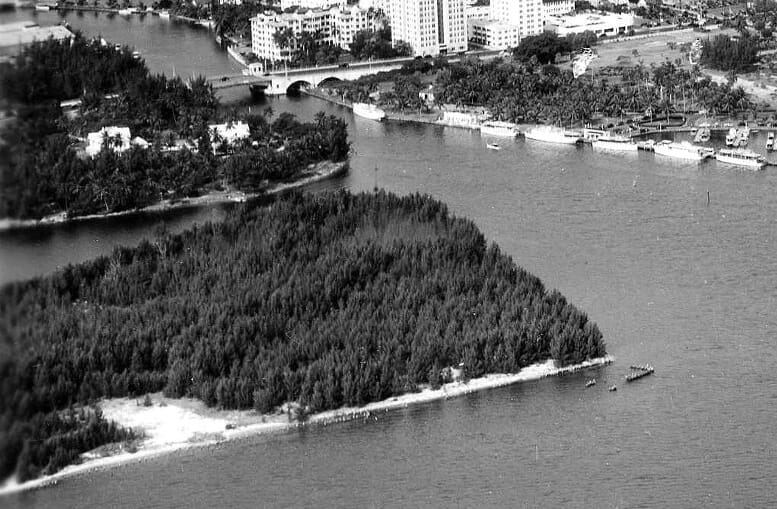 Burlingame Island in the 1940s

This is an aerial photograph of Burlingame Island in the 1940s. The spoil island was created over time due to multiple dredging projects of the Miami River through the years. The island was sold by Florida’s Internal Improvement Fund to the Burlingame family in 1916. It was at that time that the island took the name Burlingame Island.

The island changed ownership a couple of times prior to being sold to Edward Claughton in 1943. The Claugton family-owned strip malls, a chain of local theaters and the Urmey Hotel at the time they purchased Burlingame Island. The landmass was renamed to Claughton Island in 1966 to honor the patriarch and matriarch of the family.

What began as a desolate spoil isle in the early 1900s was expanded to 20.7 acres by the time the Claughton family purchased the island. The Claughtons would later expand the landmass to 44 acres. As one can see, the island was completely undeveloped at the time the photograph was shot. Trees had taken over the island as its owners waited for the right time to develop the 44-acre parcel of land.

Development would not be possible until there was a bridge that connected the island to the terminus of the Tamiami Trail (SE Eighth Street). This finally occurred in 1972 which opened opportunities for the clearing of land and construction of condominium towers. However, it took another decade to complete the first building on the island which was completed by Cheezem Development Corp and called Brickell Key One. Development on the island would continue over the course of the next twenty-three years to provide what we know as Brickell Key on Claughton Island today.

Also seen in the photo is Brickell Point, the Brickell Avenue Bridge, the former Royal Palm Gardens and dock, as well as Fort Dallas Park just west of the bridge on the north side of the Miami River. This photo captures the quiescent setting of the Magic City during the middle decades of the Twentieth Century.

You can learn more about the Brickell neighborhood by purchasing the book: Brickell Avenue Neighborhood book as authored by Casey M. Piket and Dr. Paul S. George and published by Arcadia Publishing.