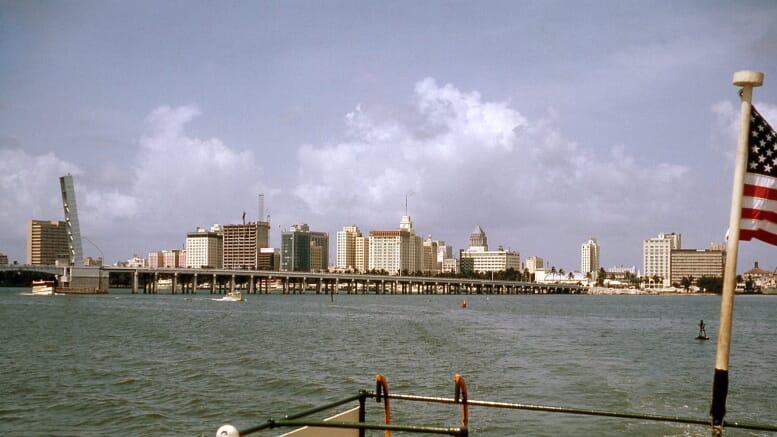 This Kodachrome photograph provides a view of the downtown Miami skyline in 1964 from a boat in Biscayne Bay. The vantage of the photographer is northeast of the Port of Miami bridge looking southwest. This article will describe the buildings along Biscayne Boulevard during this time.

The building to the left of the open drawbridge is the First National Bank building which was built in the late 1950s. The bank moved from the corner of Flagler Street and East First Avenue to this building when it opened in 1959 to provide their customers more parking. The edifice still stands as the Vitas Health building.

Moving from south to north, or left to right in the picture, one can see the McAllister (pink building), and Columbus (white building), hotels. The McAllister was the tallest building in Miami when it opened in the fall of 1917, and the Columbus was constructed during the great building boom of the 1920s. Both structures were razed by the late 1970s and the land that they once resided is now the location of the 50 Biscayne condominium building.

The building under construction to the north of the Columbus Hotel is the New World Tower. It was built by Jose Ferre in the mid-1960s and opened in 1965. It still stands today and is known as 100 Biscayne Tower. The building to the north of the New World Tower is the Miami Colonial Hotel. It opened in 1925 as the Watson Hotel, but was renamed when ownership of the hostelry changed in 1930. The hotel, which now operates under the name YVE,  is one of the few relics of the 1920 building boom that still stands along Biscayne Boulevard. 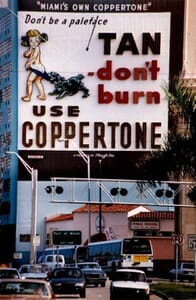 To the north of the Miami Colonial is the Everglades Hotel. It was also constructed during the building boom of the 1920s and was scheduled to open the week of the 1926 Hurricane. The lobby was flooded during the great storm, but after the water receded, the Everglades provided temporary housing for Miami residents who lost their homes during the hurricane. This hotel stood along Biscayne Boulevard until it was razed in 2004 to make room for the Vizcayne Condominium building.

The Biscayne Terrace Hotel, which is located just north of the Everglades Hotel, opened in 1953 and was renamed to the Best Western Marina Park Hotel in the 1980s. It has since been renamed to the Holiday Inn and is earmarked to eventually be razed to make room for a project called the World Trade Center of the Americas. The date for demolition and start of the new project is uncertain at the time of this article.