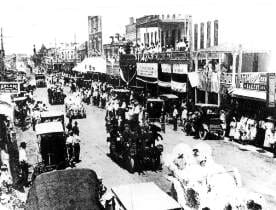 The photograph depicts an Easter Sunday Parade on Flagler Street in downtown Miami. Although the exact year is not known, it is estimated that the parade took place during the nineteen teens, or maybe as late as the early 1920s.

Based on the cars and stores, does anyone have a more specific estimate of the year of this photo?