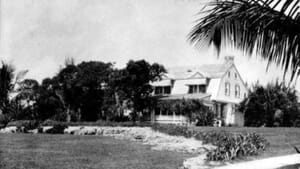 Andre and Edna Rickmers bought the lot at 609 Brickell Avenue from Mary Brickell shortly after arriving in Miami. The couple arrived to Miami in 1905, a year after they got married in Pittsburgh. Edna was from Pittsburgh and her husband was a ship builder from Germany. He was listed as retired in the 1908 Miami City Directory.

Andre and Edna were very active in real estate in the growing Miami area. The couple owned a fair amount of property in today’s Omni neighborhood.

They also owned the land where the Olympia Theater resides. It was actually Edna Rickmers that gave the building the name “Olympia Theater and Office Building” in 1926.

However, Andre was not alive to see the building of the Olympia. It isn’t clear the year he died, but Edna Rickmers was listed as a widow by the 1918 Miami City Directory.

Following the sale of the property to the church, Edna Rickmers moved a few blocks south to a mansion located at 1927 Brickell Avenue. She lived in this mansion until her death in February of 1956.