In preparation for the opening of the newly created Bayfront Park in 1925, the City of Miami extended SE First Street from SE Second Avenue to South Bayshore Boulevard. The boulevard was later renamed to Biscayne Boulevard.

Prior to the extension of the street, the land being constructed in the photo (Figure 1), was part of Royal Palm Park. The park was privately owned and associated with the Royal Palm Hotel. By the early 1920s, the people of Miami felt the need for a city owned park and began the planning and construction of Bayfront Park. Figure 2 is a Sanborn Map showing the layout of South First Street and Royal Palm Park in 1924. 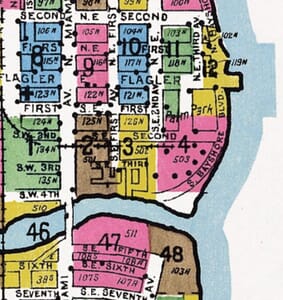 On the right side of the photograph was Hotel Urmey. It was located on the northwest corner of SE Second Avenue and SE First Street. The hotel was built in 1916 and opened on January 4, 1917. The hotel was razed in 2005 and the Centro Lofts recently opened at the former location of “The Urmey”.