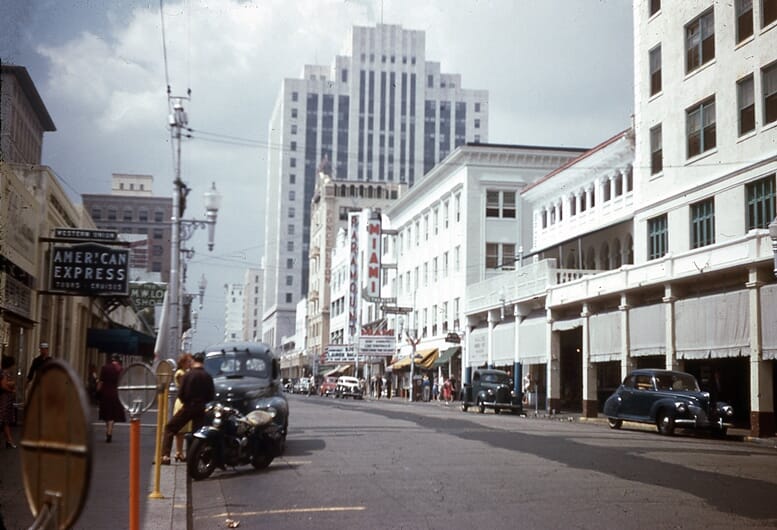 This photograph provides a great view of Flagler Street looking west from Biscayne Boulevard in 1945. The great war had just ended and those seen in the photograph were beginning to transition into what would become the post-war boom of the 1940s and 50s.

Downtown Miami’s most important street has changed dramatically from the time this picture was taken until today. Many of the buildings and the westward view of this street is completely different more than seventy-five years later. 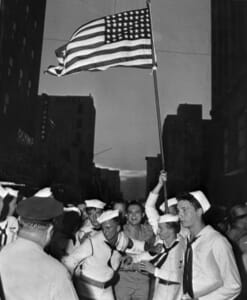 On the south side of Flagler Street, and closest to the photographer, was an American Express travel agency office. It sat behind the downtown Pan American airlines ticket office, which was located on the southwest corner of Biscayne Boulevard and Flagler Street, but out of view of the photographer. Further to the west on the southside of the street is the Olympia Theater, where sailors gathered to celebrate the announcement of Victory Over Japan (V-J) day earlier in the year.

On the north side of Flagler Street, closest to the photographer, is the back side of the McAllister Hotel, which was built in 1917 and stood until the late 1970s. To the west of the hotel is the Elks Club, on the corner of NE Third Avenue (Short Street), and Flagler Street, which would move to Brickell Point a few years after this photograph was taken. This building would become part of the McAllister Hotel after the Elks Club left.

On the west side of NE Third Avenue is the Calumet Building, which was home to the Miami Theater and the infamous Turf Exchange Bar. Beyond the Calumet was the Paramount Building with its namesake theater as the most prominent tenant. Downtown Miami was known for being a big motion picture theater district during the middle decades of the Twentieth Century.

West of the Paramount is the Vail Arcade and then the Ponce De Leon Hotel, which may have been best known as the inn where Al Capone stayed when he first arrived in Miami in December of 1927. Further west of the hotel is the Alfred I Dupont building which was the southern command headquarters for the navy during World War II. It was nicknamed “USS Never Sink” given its significance for the navy during the war.