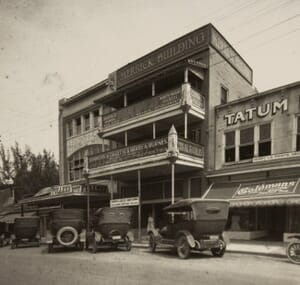 At the time that George Merrick was assembling his team to carry out his vision for Coral Gables, he made an investment in property on Flagler Street in downtown Miami. In April of 1921, Merrick paid $50,000 to John Burdine for what was called the Mackinac Building at 158 East Flagler Street.

The Miami Metropolis referred to the transaction as the highest price ever paid for a Flagler Street property. The building became the headquarters for the new Coral Gables development and was owned completely by Merrick.

Some of the other tenants in the Merrick Building included: F.M. Button, Dammers and Gillette and H.A. Burnes. Button was hired by Merrick to lay out and landscape the twelve hundred acre Coral Gables subdivision. Button first came to Miami to work for Charles Deering to oversee the planning and landscaping of Charles Deering’s twenty-acre Buena Vista estate.

Dammers and Gillette were hired by Merrick to auction and sell lots in Coral Gables. Doc Dammers became Coral Gables first mayor. In addition, the Mackinaw Apartments continued to operate in part of the Merrick Building. 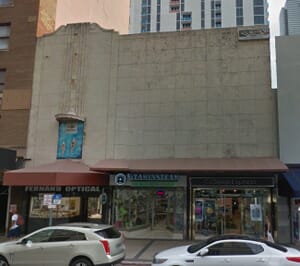 To the west of the Merrick Building was the location of the Tatum brother’s real estate companies. Some of the organizations included: Tatum Brothers Real Estate and Investment Company, Lawrence Estate Land Company, Tatum’s Ocean Beach Park Company, Miami Land and Development as well as Miami Traction Company. The Tatum brothers were very active in the development of Miami, South Dade and Miami Beach during the first half of the twentieth century.

By all indications, the building in the cover photo still stands at 158 East Flagler Street. The Miami-Dade Property Appraiser dates the building to 1924, but the date may represent the year the building was modified versus replaced. Figure 1 is a picture of the building in 2016.

The former Merrick Building represents a significant symbol of the building boom of the mid-1920s. It also represents a milestone in Merrick’s journey to execute on his vision for Coral Gables.

Cover: Merrick Building on Flagler Street in 1921. Courtesy of HistoryMiami.