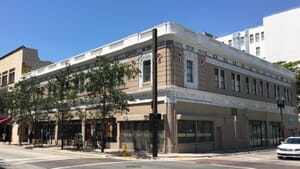 The Hahn Building is an historically designated structure located at 140 NE First Avenue in downtown Miami. It was commissioned by Mrs. Arena Hahn in February of 1922 on a lot that she owned for two decades prior to the announcement of the development project.

Hahn hired architect George L. Pfeiffer of Pfeiffer & O’Reilly to design what was planned as a ten-story building. Phase I of the project was to erect the first two stories of the structure, while a later phase would construct the remaining eight floors. The design provided room for two elevator banks to accommodate the second phase of the project.

Hahn hired the construction firm of J.C. Miller in 1923 who started the project by pouring the foundation in early October of 1923. The firm planned to have the building complete by December 1, 1923, but it was not finished until early February of 1924. 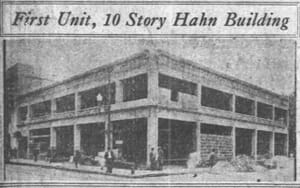 The end of the building boom in the mid-1920s most likely ended the commencement of phase two of the project. The structure remains only two stories, but the foundation is configured to allow for the originally designed ten stories. Time will tell if any future owner decides to petition the HEP board to complete the original plan for the building.