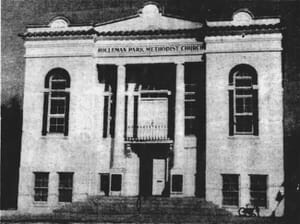 As one drives west on Fifteenth Road from the Brickell neighborhood, it will gradually turn into southwest twelfth street once you travel under the I-95 overpass. At that point, it is hard to ignore the abandoned building nestled between Triangle Park and the towering expressway. The edifice appears to be a remnant of a forgotten time in Miami. While it is clear to most that the structure once was a church, its story is a mystery to most of those who drive past it.

Construction of the church began in 1924 and it was completed by the beginning of 1925, during the height of Miami’s great building boom. It was constituted by members of the Riverside M.E. and Trinity M.E. churches and opened as the Holleman Park Methodist Church in April of 1925. The congregation was named for the neighborhood in which it resided.

Within six years of opening, the church provided the funeral service for William Brickell. William was the oldest son of Bill and Mary Brickell and a member of the family that Miami’s prominent neighborhood is known. He died in Lake Placid, New York, from complications of asthma in September of 1931. He was transported back to his home city of Miami for his funeral and burial. 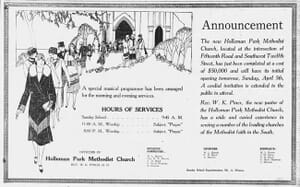 The church was built at a cost of $50,000. A caption in a Miami News article in January of 1953 valued the property at “more than $50,000”. It appears that the value of the land and building had not increased much in nearly thirty years. In 1965, the church sold to the Ebenezer Free Will Baptist Church for $26,000. Property values suffered as more and more people fled the city for the suburbs in the 1960s. The property had been abandoned for a long time but was sold in 2017 for over $1.5 million.

See the Holleman Park Methodist Church on Abandoned Florida for some pictures of the interior. 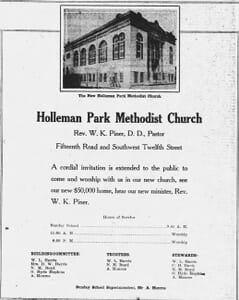