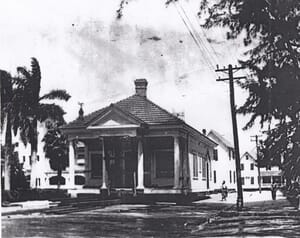 By the mid-1910s, downtown Miami was becoming too hectic for Dr. James M. Jackson and his wife. The couple had built a fine home in 1899 that sat at the northeast corner of today’s East Flagler Street and NE Second Avenue. In 1899, the intersection would have been described as Twelfth Street and Avenue B.

Dr. Jackson then built his office, or surgical center, six years later in 1905. The smaller building was conveniently located just north of his home on Avenue B.

Jackson had decided by early 1916 that he would sell his downtown land and move further outside of the city. However, he did want his first home in Miami, and his office, preserved from demolition. His idea was to move the home from downtown to property he owned on Miami Beach.

On August 19, 1916, both his home and office were lifted onto Twelfth Street with the idea of rolling both structures east to the end of the street and onto a barge. The photo in Figure 1 shows both buildings on Twelfth Street in the process of being moved onto the barge. 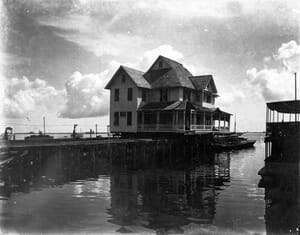 Figure 2: Jackson home on Barge in 1916. Courtesy of HistoryMiami

The photo in Figure 2 shows the Jackson home on the barge and ready to be moved. Prior to the buildings reaching the barge, a prominent businessman by the name of H.T. Whaler had purchased both structures and changed their destination. He had the Jackson home and surgical center moved to the Brickell neighborhood.

The Jackson home was demolished in the early 2000s, but the office remains at the corner of SE Twelfth Terrace and Brickell Bay Drive. It has been the home of Dade Heritage Trust for many years.

Read about Dr. Jackson, his home, office and the move of both by barge at Miami-History.com